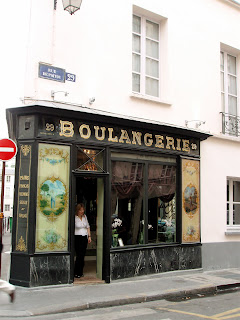 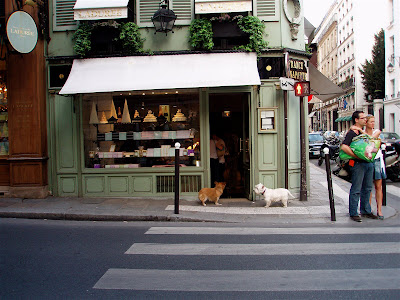 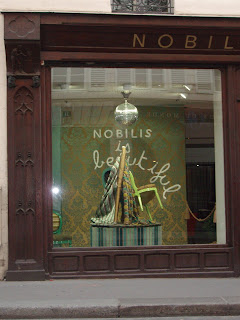 A few months ago we made a whirlwind trip to Europe. Normally we like to park ourselves in one place for awhile and really get to know the area, but for this trip, we decided to cover a lot of ground. And cover we did, from Amsterdam to Belgium, and then into Normandy, down to Paris, across to the Champagne region, and then back to Amsterdam. It was so much fun, and so interesting, and so intense, and so packed full of experiences. We each kept a journal on our laptop, and they both go on for pages and pages… to condense and edit for sharing purposes is almost impossible. But here and there I hope to post some little nuggets that might be of interest to virtual or armchair travelers. Thought I’d start with a few photos of fun store windows, which I was always on the prowl for.

This window in Paris (Nobilis) was a traffic-stopper. The chairs and billowing fabrics were dangling from a structure atop a revolving platform; if you stood there long enough, these crazy chairs would all go around in front of you. Most impressive was the edgy way the wording was spray painted (!) onto that gorgeous fabric, which was a stunning French damask that probably went for about $300 a yard.

The other scene I loved, and just managed to catch before 80 cars dashed by (and before any shopkeepers yelled at me, as they don’t particularly like you to take photos), is the shot of Ladurée above (actually, I don’t know where it’s going to appear because I have no idea how to place images properly). Anyway, this is THE place to feast on the most delicious little macarons in the world. They’re a French national treasure, and you must go there when in Paris. While we were visiting, we kept seeing this billboard campaign from a car manufacturer, which compared their quality to that of the Ladurée macarons. The billboards featured a stack of the pastries next to a car. In their super sized photo, they looked like weird pink hamburgers, and I just didn’t get it, until our ex-pat friend Susan explained the whole thing. It’s a socio-cultural-historical part of the French psyche, and you just have to go experience it for yourself. In fact, I suggest first taking tea in their lovely Japonesque tearoom, and then popping over to the bakery side to stand in line with the French patrons. For a small investment, you get to choose some fabulous pastries, which will be placed inside the most wonderful little box you’ve ever seen (turned out to be my favorite souvenir!). So, first observe the quintessential French couple standing on the corner, waiting for the light to change, but posing as if for a photo shoot, with their grand bouquet of flowers. Then observe the quintessential French dogs waiting in front of Ladurée for their mistresses to appear (perhaps with a petite treat?). Then there’s that great, perfect French green that the whole place is steeped in, and then the stacks of boxes and pastries in the window (harder to see). By the way, this Ladurée is in the 6th arrondisement; there is another on the Champs d’Elysee that is newer and apparently more swanky… but we didn’t get there.

The last picture for tonight is the Boulangerie, which is a perfectly preserved, historical icon of French style. Ah, but it’s not actually a boulangerie anymore: walk inside and you’ll find one of the most daring, modern boutique hotel lobbies in Paris. Can’t remember the designer’s name, but he managed to save the 19th century exterior and insert his modernist vision inside. It’s quite the juxtaposition.

Here we are in 2021 (and it couldn't get here soon enough)! We're open Tuesdays through Saturdays from 10-4 (and can also arrange for porch pickup or private shopping). Thank you for all your support over the years (and especially last year): we are looking forward to a safe, happy, healthy future. Wonderful new finds are arriving daily – maybe it's time to come get a little retail therapy at Pomegranate? Please wear a mask and be respectful of social distancing at our tiny shop – we'd love to see you!